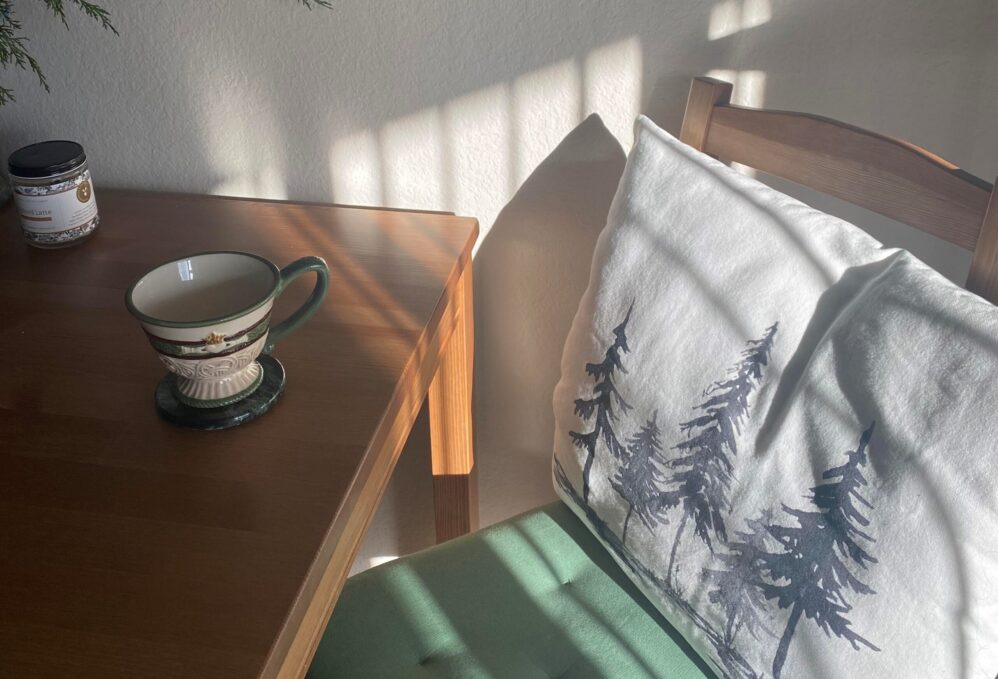 Recently I finished going through the 10,000+ photos I had on my old laptop (I deleted a lot – I got just under 4.000!) I saw a lot of photos of my old life and the harsh living situations I used to have. It was difficult to see, but it made me feel a new gratitude for the home I have now. I don’t want to give the impression that my life has always been cozy and hyggelig or that Joel and I got here all on our own, so I want to share how I got to where I am and the dangerous living environments I’ve been in.

I used to live in a shed with Joel and my late cat, Binx, on his mom and stepdad’s property. We lived this way for a year and 8 months before we left for Ireland in August 2018. It did have electricity, A/C, internet, and glass doors so we could have light during the day, but it was not a Pinterest-worthy cottage by any stretch of the imagination. It was at the back of a chicken yard, and living in the woods of South Florida, we dealt with bugs. It was horrible.

It wasn’t meant for living in, and mold developed in the corner where the bed was. Because of that, I got sick every couple of months. I had no idea that was why I was getting sick until we had to move the furniture out before the hurricane, and saw how bad it was. We treated the mold and I stopped getting sick after that, but the air quality was still really poor.

On several occasions we had to wade through water just to get through the yard, and when it rained we were either stuck in the house or in the shed, unless we wanted to run quickly to get between the two.

Joel often worked until after dark and try as I might to get back to the shed before the sun set, sometimes I couldn’t. I remember being so terrified to have to run through the super dark yard, since there were racoons, alligators, and large cats that lived in the area. As well as snakes and spiders and the like. I’m sure it’s easy to imagine that I was severely depressed during this time. I was working at a job that was unbearable and my cat was in his last months.

When I got back from Ireland late January 2019 (Joel had to leave Ireland after 3 weeks because of work issues), we moved in with his dad and stepmom while we were looking for our own place/planning a tiny house build. We lived there for 2 weeks and left on our own accord for reasons I’d rather not say and moved into my mom’s one bedroom condo. She insisted she always slept on the couch so we could stay in her bedroom if we needed to, which we did, although reluctantly. Realistically we had no other choice. Long story short, it wasn’t easy in such a cramped living situation. We were living out of suitcases for 3 months until we made our move to Texas.

When we visited Texas, we were shown a really nice model unit and decided to apply. We found out we were accepted when we came back to Florida and got things going quickly after that to move over there. When I first saw our actual apartment, my heart sunk. It was the polar opposite to how the model unit looked. It had old dark brown carpets, it barely had any natural light, and it had mold, termites, and roaches. My anxiety was through the roof constantly. We didn’t know it was like this at all, and when we brought it up to the front office, they were defensive and unhelpful. To put the icing on the cake, someone smashed our bedroom window on the night of Joel’s birthday.

My dad was the one who convinced us to start looking elsewhere and not wait until our 13 month lease was up. I remember seeing this place we’re in now for the first time and loved it, so we applied and got accepted. So, after just two months and on the last day of the month, we terminated the lease and left the old apartment. (Quick disclaimer, we wrote up a document detailing how they violated the lease, citing the legal information, so in the end we weren’t held responsible for paying the remainder of the contracts rent.) Because of the bug issue, we had to pack and move our entire apartment in one day, since we didn’t feel comfortable leaving the boxes sitting around. From morning until night (until AM the next day…) we moved boxes and furniture and carried it all up to the third floor. We didn’t have as much furniture as we do now, thankfully, otherwise the move would have been that much more exhausting. I thank the Universe that I got my period the next day and not moving day because we would have had to hire movers last minute.

I remember the incredible relief I felt when we opened the front door and felt air conditioning. Unlike the old apartment, the electric was on before we got here. After we finished moving everything upstairs we sat on the floor and ate Whataburger on a makeshift cardboard box table in the dining room. I think it was around 2 AM so fast food was our only option.

I feel completely comfortable here, it’s clean, the carpet is light beige and not manky dark brown(!), there’s tons of natural light, it’s in a very safe area, and we’ve never had any bug issues (except tiny weevils that the front office sorted out in a few days). This really is my dream apartment.

We did not do everything on our own – we got a lot of financial help from my parents and Joel’s mom and stepdad. When we got here, it took about 2 months for the licensing office to process Joel’s massage license for Texas, so all the while he wasn’t allowed to start work and my minimum wage wasn’t nearly enough to support us. His mom and stepdad sent us $900 which covered more than a months worth of rent at our old apartment, my dad was sending me $200+ a month, and my mom was regularly transferring money to my account and always paid my student loan (actually, she STILL does this!) Finances are a topic I often see evaded, so I wanted to make the story of my journey as clear as possible.

So, that is how I got to where I am today, from the beginning of 2017 when Joel and I started living together until now. I wanted to paint a clear picture of my story to pave the way for my blog, and wipe away any internet illusion that my life has always been cozy and hyggelig. I want to create beautiful and inspiring content, but I want to show that I’ve been in shit living situations and came out of it with so much gratitude. Work on our part, help from parents, and unyielding guidance from the Universe is why we’re here.

If you’re currently in a bad place, I hope you can relate to this and that it helps you push forward another day. Daily life can seem like eternity when you dread going to work, and when you also dread going home from work. I understand this very well, so believe me when I say that you will enjoy life one day, possibly sooner than you think.

If you made it to the end of this blog post, thank you! It means so much to me ♥ Hugs! Talk soon ♥

What I’ve Been Up To Lately